August in Sydney can be quite a dreary month, it can be wet, super cold with windy days and only sometimes a glimpse of Spring in the air! But what I like about the last winter month is that you can still hibernate and enjoy all those indoor activities.

We go through our board games, we set up our wooden train set, do painting and I even taught the kids how to play marbles this month. We had the added joy of reviewing a beautiful wooden play theatre from the brilliant new toy store Happy Go Ducky. Such a perfect toy for those cold, rainy days indoors or just days when you want to stay inside and chill.

Specialising in the best of Czech made toys Happy Go Ducky, are the only store in Australia stocking some of the most beautifully handcrafted wooden, tin and crochet toys from the Czech Republic.

The boys were delighted to find out that they would have a little puppet theatre to play with. We do not own a puppet theatre as I have found the ones I have looked at in the past to be quite cumbersome, expensive and we just don’t have the room to fit them.

However,  I think they are a gorgeous gift idea and toy because they invite so much open ended play and tap into the creative imaginations of children. They allow kids to make up stories, create characters and voices and ultimately have a lot of fun in the process!

The Detoa Wooden Theatre is small, lightweight and comes in 5 easy pieces to set up the theatre.  Importantly it is also affordable so it allows you to delve into the world of drama and theatre with your children. In case you are not sure you want to fork out a lot of money on something that may be a passing phase or a longer term hobby, this theatre is perfect to test it out.

The theatre is so easy to set up that my youngest who is 4 can do it all by himself. The set is double sided, one depicting the forest that Little Red Riding Hood walks through and of course the other being, inside Grandma’s house. It makes for the perfect little afternoon interlude as the kids can set up the theatre on their own and play and imagine!

This particular theatre is based around Little Red Riding Hood and I realised as we unpacked the theatre and set it up that we didn’t have a copy of Little Red Riding Hood ( at least in English!), but it didn’t seem to matter so much as the boys knew enough of the story to have fun playing with the set and the characters.

What is ingenious with this theatre is that it comes with 2 magnetic sticks that you place under the theatre and the magnets stick to the wooden peg dolls above ( these too have magnets on the bottom) , allowing you to move the characters around the stage as you travel through the story. It takes a bit of practice to get the characters moving seamlessly across the small stage but the kids enjoyed it all the same. Actually they enjoyed it even more when the characters fell off the stage – typical boy behaviour! 😉

I have to warn you, that with this theatre you may be performing Little Red Riding Hood multiple times, but for myself it has been fun to learn the story all over again and to research a little about its origins.

The first published version of Little Red Riding Hood was in the 17th Century by Charles Perrault and became more well known with Brothers Grimms version in the 19th century. I hadn’t appreciated just how old this fairy tale is and after reading many different versions over the last few weeks for this feature, the one I remember from my childhood is from Brother Grimm.

Although upon reading the story again, I took a different take on the moral to the story, that you shouldn’t talk to strangers but more importantly you should listen to your mother! Hehehe! It was the mother who said to stay on the path to Grandma’s and not deviate and to take the wine and cake to the Grandmother. Firstly, how awesome that Granny gets wine and cake! And yes, so I have twisted the tale to suit me and I told the boys, that the moral to the story is to listen to your mother as she is on the whole, almost always right. 😉 Hudson, I think almost believed me.

The only thing about the theatre is that it is story specific so it could limit you to only telling tales about little red riding hood but that is from an adult’s perspective. I also thought it would be quite good for role playing situations like “tricky people” and other life situations like playground politics.

When I asked the boys the same question, they loved the big bad wolf in particular and were not too worried. When probed further, they thought they could use our other wooden peg dolls to play with the theatre too.

I also asked my boys what it was they liked most about the theatre and they said “all of it!” which means that this theatre was a huge success in our household!

Great for:  creative and imaginary play. There are so many open ended possibilities with this toy and your child will use what they may already know of the story to think up new scenes for their play or just generally have fun with the wooden peg dolls and create their own theatrical display.

It is an affordable way of bringing theatre into your arsenal of rainy day toys and easily transportable too, so you could take it to the grandparents house or even on holidays, just pop it in a drawstring bag and away you go!

Designed and made in the Czech Republic.

Disclosure: I was not compensated for this post; however I did receive a sample for my review. All opinions are my own and not influenced in any way. 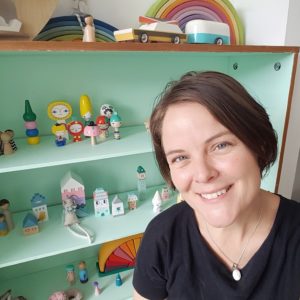